How cosplay helped me find my confidence again

Styling a wig in my kitchen. This thing is 50% hairspray.

2018 is the year my body betrayed me. I’ve had some health problems, lost hair, lost weight. After a lifetime of clear skin, I’ve had acne so bad I sometimes dread leaving the house.

My recurring feeling in 2018 has been that I’ve wanted to put things off until I look like myself again. Until I feel like myself again. But of course, that’s impossible. So I got better at makeup and arranging my hair around bald spots and did the things I signed up to do. I went to Japan, spoke at the Japan America Society, gave panels at AnimeNEXT and Otakon. I retouched photos or didn’t take any, trying to just forget about the way I look.

I’m focusing on just physical symptoms, but I also have been dealing with insomnia, anxiety, and (obvious to blog readers) a lack of motivation. One of the things that has brought me a lot of joy this year though, is the Danganronpa franchise, and more specifically, exchanging lengthy email chains full of theories about it with my friends.

Having played them all now, my favorite character is Kokichi Oma, the deceptively childlike liar-manipulator from the third game. (Please don’t google him if you’re planning on playing; here’s a spoiler-free picture.) Kokichi is a trickster who makes enemies quickly, but what’s incredible to me is that he doesn’t seem to care if people hate him (and they certainly do). It made me realize my concerns about how I look, how I act, and what I do or don’t write all come from an overabundance of worry about what other people think of me. For once, I’d like to be someone who doesn’t care about things like that.

One day, while looking up the character on the game wiki, I noticed that Kokichi’s physical measurements almost exactly matched my own. While I definitely don’t believe you need to look like a character to cosplay as them, it made me think for the first time that maybe this body I’ve grown to dislike so much could give me an advantage. I don’t like myself much right now, but I like Kokichi, and if I could be him, maybe I could like myself a little more. And so, even though it’s been ten years since I last cosplayed, I decided to give it a try. 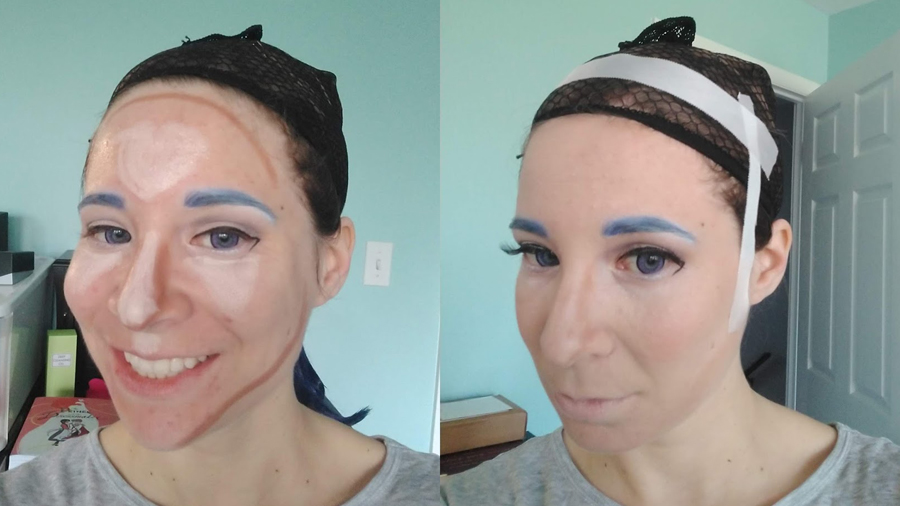 Did you know that with contouring makeup and medical tape, you can change the shape of your face?

Because I wrote a book about cosplay, I knew that you can put as much or as little work into cosplay as you want. I decided that if I was going to do this, I was going to go all in. I ended up spending a lot of time on cosplay forums. I bought a wig on Amazon and watched YouTube tutorials to style it. In the end, I used heat, hairspray, and hair curlers I made myself to give it Kokichi’s long flips. I shampooed the wig twice while going through this trial and error.

I went to Sephora and nervously asked an understanding makeup artist to help me look like a 2D character. “That’s actually a pretty common request,” he told me. Cosplay really is becoming mainstream. He helped me find a full coverage concealer and later, showed me how to change the shape and color of my eyebrows to an expressive deep purple.

This whole time, I didn’t share my progress on social media. I was still afraid I would chicken out. I’ve spent this entire year trying to ignore my physical appearance, and suddenly I was, ridiculously, doing something that would draw attention to it. But when my purple contacts arrived and I decided to do a wig and makeup test, I was so happy with the results that I decided to share it. For the first time all year, I actually liked the way I looked. 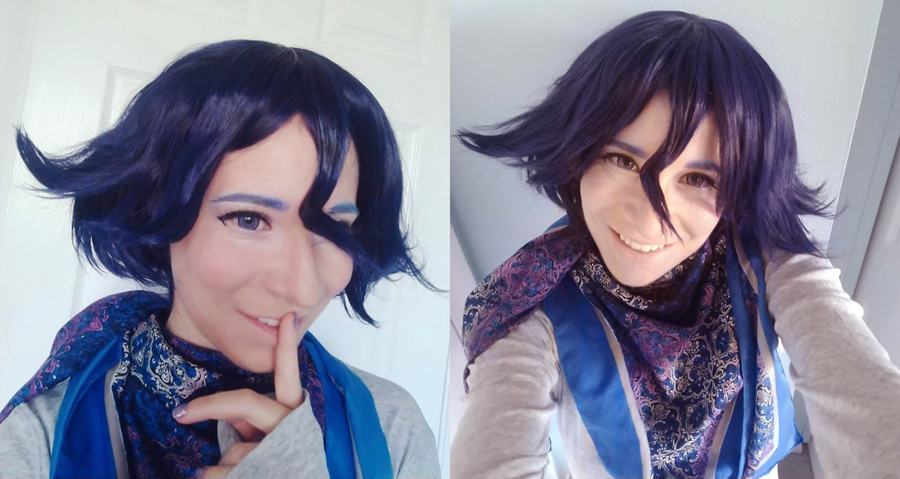 This is eyebrow attempt #1 with wig attempt #2 and no costume yet, so definitely a WIP.

Now I’m getting my cosplay together to debut at Magfest in January. I keep wanting to self-degrade and joke about how I’m pretty old to be doing cosplay, but then I remember I wrote in a book and said on international radio that “anyone can cosplay.” That applies to me, too.

Obviously, cosplay hasn’t made all my problems go away. But it has reminded me that when things suck, our fandom can be healing. I’m not the first person to turn to a fictional character when I’m confronted with my own weaknesses. Chances are you, too, are drawn to certain characters because they seem to possess something you lack. Cosplay is perhaps an unusual way of “borrowing” a character’s confidence, but I’m enjoying it so much.

[…] doing anything creative without a strict deadline in place. But at the same time, I also started working on my first cosplay in years. I didn’t tweet about it and I only shared my progress with a few trusted friends. I still think […]