Burnout, grief, and the way forward 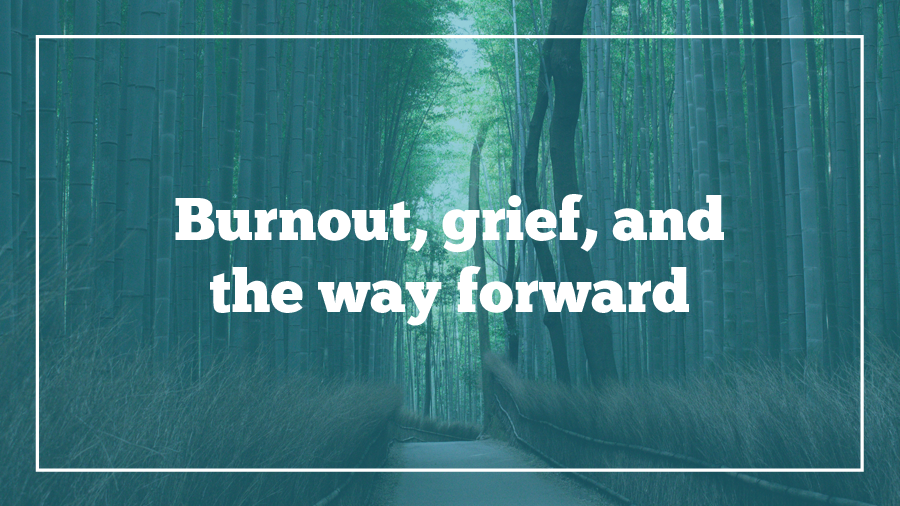 This summer has been difficult.

I’ve been grappling with grief one year after a loss, and the meta-guilt of still being so sad after this much time. I think about her every day. Some days I don’t think about her until I’m falling asleep, when I think, “I haven’t thought about her today yet.” What’s scary is thinking that one day, I might not think about her at all.

I’ve also been dealing with health problems of my own. I’m not ready to share more information right now, but I am aware that I look sick. I am just trying to show up in public, at anime cons and Japanese class and conversation group, while ignoring it. I am trying to focus on the present until I have more information about what my life will be like in the future.

I’ve been living in the liminal space of being moved out of my apartment of the last seven years into a condo that needs a lot of time, effort, and furniture to feel like a home. This is the first place we’ve owned and we are paralyzed by choice. Drilling through the wall is no longer off limits, for example, so we’re carving this place out to better fit our extremely online lives. It’s fun, but it can be exhausting to live in an unfinished space that still needs so much from me.

I’m not sure if it’s just one or all three of these things that have led to my current dilemma: I’ve stopped watching anime for fun. Everything I started this summer, no matter how great it seemed at the beginning, has lost my interest. I’m still watching the shows I need to review (Harukana Receive and Free! -Dive to the Future-). But I have to stop myself from saying that every episode sounds forced or fake or emotionally hollow. Even the most acclaimed shows this season just feel strained to me. I know this isn’t reality; this is burnout.

Anime has always been my escape when times were hard. When I felt burned out about work and studying earlier this year, I watched anime to relax and recharge until I felt like myself again. I didn’t know I could burn out on my favorite thing.

Anyway, this is a big reason I haven’t been posting. I love to write about anime and how it makes me feel as a fan. But it hasn’t been making me feel much of anything lately. So I’m trying to treat it like any other kind of burnout. Don’t feel guilty. Don’t force it. Take a break. (I can’t believe I’m the same blogger who in 2013 wrote the bragging blog title: “Burnout, what burnout? A year in anime consumption.”)

I’ve been running Otaku Journalist for almost nine years now. My writing voice has grown up a lot over that time, and I’ve changed a lot as a person. My periods of productivity have far outnumbered my hiatuses, but it’s a reminder that I’d like to make it easier to crawl my archives in the future. There’s some helpful content here in between the “sorry I haven’t been posting” stuff. That might mean seriously expanding the Start Here page, or running a series of posts collecting different categories of advice over the years. Every time I think, “Where do I want this blog to go?” I always land on the same answer: to help geeks launch their careers.

Thanks for bearing with me. I may still be standing still in 2018, but I have a roadmap planned for when I’m ready to move forward.