What I learned from writing a novel in a month 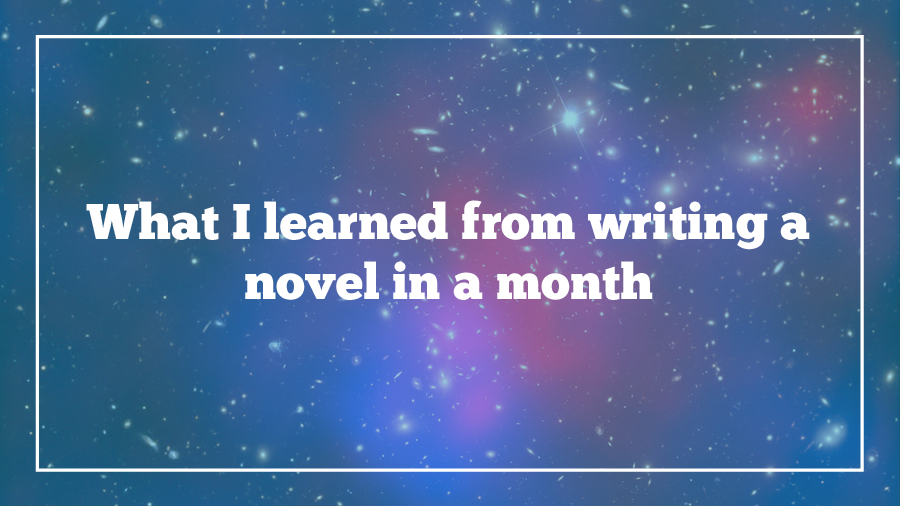 On October 30, I wrote How I’m silencing my inner critic to tell you about the ways I was preparing for National Novel Writing Month. Back then, I was a very different person. I was a person who had never written a novel before.

A little over one month and 50,100 words later, that’s changed, and I’ve changed, too. I’ve done a lot of difficult things this year. Some, like running a 10k and taking the Japanese Language Proficiency N4 exam, were planned. Others, like saying goodbye to one of my oldest friends, were not. But finishing NaNoWriMo was the one that required the most daily, dull dedication.

In November, I wrote at least 800 words every day for my novel. Here are some of the lightbulb moments that came to me over the course of that work.

Writing a book is physically demanding

On November 23, I woke up with an ache in my left wrist—tendonitis. I wore a brace for the rest of the month. It turned out that meeting the daily writing goal, on top of all the other writing projects I was work on, ended up being my body’s limit. I’ve had tendonitis before, back in college, but I’m pretty sure it was from playing way too much Guitar Hero.

I’ve only written one nonfiction book this long—Build Your Anime Blog, which was 50% interviews, took me two months. I was commissioned to write my cosplay book in 7 weeks, but it was mostly photos and only about 10,000 words. Every other year I’ve tried to finish NaNoWriMo, I reached my mental limit long before my physical one.

I’ve never had writing-related injuries before because I don’t type correctly. I just typed this sentence ASDFJKL; style like I learned in school, but I type more quickly using one thumb and four fingers. Weird, I know. But my typing speed is around 64 WPM and I’ve never had carpal tunnel so I consider it a non-issue (unless somebody is watching me and then I get really self-conscious of my weird typing). If I ever do NaNoWriMo again, I’ll consider dictation, typing on a smartphone, and other strategies before my wrist gives out.

Some of the best ideas happen when you’re stuck

One of the questions NaNo asks you when you start is, “Are you a planner or a [seat of your] pantser?” I would absolutely consider myself a planner. I knew I wanted to write a novel about a Type 3 parallel universe (that’s the one that’s the most fun, I think) so I checked out some books on quantum mechanics and the Many Worlds theory at the library and took notes. By the end of October, I had drafted out a bunch of plot points and scenes I wanted to use for sure.

And then, November 14 happened. I reached the halfway point of 25,000 words, but I didn’t have any plot left. I had no idea what I was going to do and I wasn’t about to quit then. So I stumbled through the dark, trying to follow the threads I’d already started unraveling to their logical extensions. By then I had a pretty good idea of who my characters were. Instead of driving the narration inflexibly, I started asking myself how they would react to the situations I’d already put them in, and let those suppositions lead to new scenes and developments.

I accidentally wrote my characters into a love triangle, solved plotholes with bizarre Google searches, and when I was really stuck, referenced back to my library books, especially Hyperspace by Michio Kaku, which I highly recommend. If nothing else comes out of this novel, at least I learned a lot about the known universe.

Fiction doesn’t have to be for anyone else

I was afraid to tell anyone about my novel. I was worried that any kind of reaction, even positive, would paralyze me. In the entire time I was working on it, I brought up exactly two plot points with my friends, and that was only after I had reached 40,000 words.

But I can tell you about it now that it’s December. My working title is “Until We Meet Again,” and it’s a science fiction lesbian romance. It’s also about being a first-generation American, adult friendships, start-up culture, tropical fish, quantum computers, and people cooking pasta more often than is realistic. Especially after I ran out of plot, I began mining my entire lifetime of experiences and I got a pretty eclectic mix.

I realize this does not sound like a recipe for a bestseller, or even like something you’d want to read. And I realize now that’s OK. This shitty first draft doesn’t have to be published or even be read by anyone but me. For years I struggled because what I was worried what I was writing wouldn’t be good for publication and now I realize with NaNo, the end product is not the point. The point was the process of showing myself I could stick with a story this long.

Writing a book can help you heal

Jess was a writer. She met her wife online because they read each other’s fanfiction! She kept beautifully handwritten bullet journals. I’m grateful she left so much of her writing behind, but it’s still deeply upsetting to me that her life’s work is complete far too early.

When my friends asked me about my novel, I told them it was “Jess fanfiction” because it’s about the discovery of a parallel universe in which some key events—including one character’s death—never happened. While writing this novel and exploring the presumed flexibility of our physical universe, I was reminded that grief isn’t a linear process, either. I thought that fully immersing myself in this story for a month would have been an escape from my real life, but it was really a lens through which to reflect on missing her from a different perspective.

There were a lot of emotions I was holding onto because I didn’t want to forget. But now that I’ve put them in a book, I’ve been able to mostly let them go. People say grief is “hard to put it into words,” but putting it into words freed me, I think. Now that I’ve written about how much I miss Jess and made it part of this novel, I know I’ll never forget my friend.