Why I canceled my Crunchyroll membership 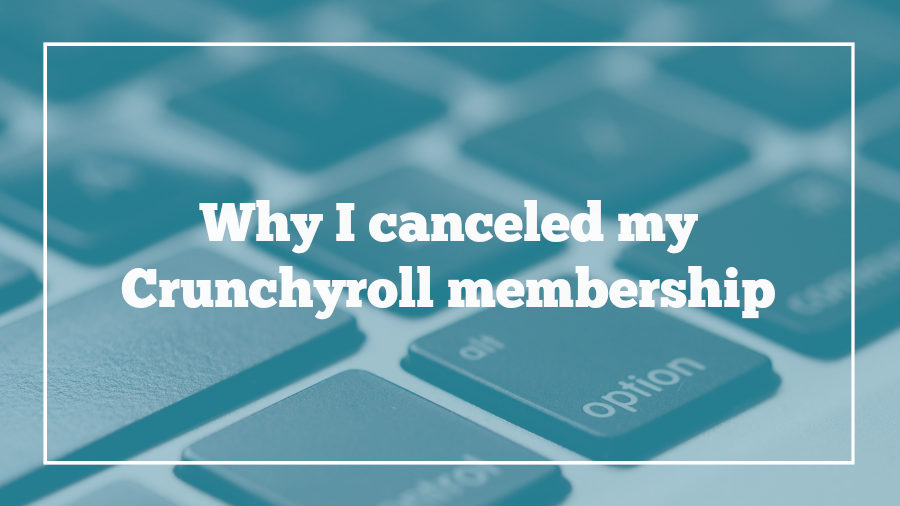 I still remember the first time I heard about Crunchyroll. I was at Anime Boston 2010, and this up-and-coming anime streaming service was one of the con’s biggest sponsors. I need to see if I can dig up the promotional postcard they gave us with the program guide, showing the original logo: all cartoonish black font and orange sushi roll. I used the promotion on the back of that postcard to open up my account with them. Today, I closed that account.

Over the past 12 years, I’ve been more than a Crunchyroll subscriber; I’ve also had a working relationship with the company. More recently, I’ve written scripts for Crunchyroll videos like The Evolution of Anime Figures. I’ve been thrilled to serve as a judge for the Crunchyroll Anime Awards for the past three years (prrrrobably not getting invited back to do that)! I have friends who have worked for Crunchyroll, and friends who still do. This is not about them, by the way.

My relationship with Crunchyroll began when it was a comparably tiny company. In 2013, after Sankaku Complex published the unsourced claim (some things never change) that piracy is preferable to creators over using Crunchyroll, I reached out to then-CEO Kun Gao and he made room on his calendar, the same day, to chat on Skype about how Crunchyroll actually compensates creators. I happened to be in San Francisco for business that same month, and Gao invited me to tour Crunchyroll HQ. From the “Seele” conference room to the geeky furnishings, it felt like a place where people who genuinely love anime work.

But as Crunchyroll grew, things started to change. I first noticed how different the company was after it was acquired by Ellation. I was covering Crunchyroll fairly regularly for my Forbes blog, but I always had to use a PR person as a go-between. Kun was still CEO, but his schedule was much busier and even though I was now working for a far more prestigious site, I couldn’t get an interview with him the way I could when I was just a personal blogger. I saw this as a positive change though, a sign that this company that got its start publishing illegal fansubs was worth taking seriously. As a geek of a certain age, who remembers when being an anime fan labeled you a certified weirdo, I wanted anime to go legit.

But I didn’t think about what the side effects of bigger and bigger companies acquiring Crunchyroll would be. I guess I thought it meant the people who worked there would get rich. I didn’t think that it would mean a less than living wage for the people who sub and dub the actual product. Ninety dollars to sub 450 lines of Japanese? Getting paid $150 to dub a movie that earned $30 million at the box office? All of this and not even being open to meeting the dub actors’ union at the table, instead preferring to recast Mob? It used to be that supporting Crunchyroll was a part of how I expressed my fan identity. Now it feels like I can’t call myself an anime fan in good faith while supporting a company that does so little for them.

I believe that there are lots of people at Crunchyroll who genuinely love anime and are as frustrated at the direction the company is taking as I am. I don’t think Crunchyroll’s fannish heart and soul have been completely crushed under the thumb of corporate overlord Sony. That’s why I’m trying to make a statement with my cancellation. Crunchyroll is counting on the buzz of the incredible upcoming fall season to drown out any fan discontent. But I’ll be staying mad.

And no, I’m not pirating shows instead. I’m seriously hurting myself more than I’m hurting Crunchyroll. I have no misconceptions that anything will change before fall, or that the “anitwitter” bubble we have is as big or influential as it sometimes feels. And I completely understand that opting out of this season is mostly not realistic for my peers, especially those who review anime, because Crunchyroll is nearly a monopoly now. But I hope the symbolic message of even one longtime subscriber taking action makes a statement.

[…] Why I canceled my Crunchyroll membership (Otaku Journalist, Lauren Orsini) […]