What I’ll do instead of watching the fall anime season 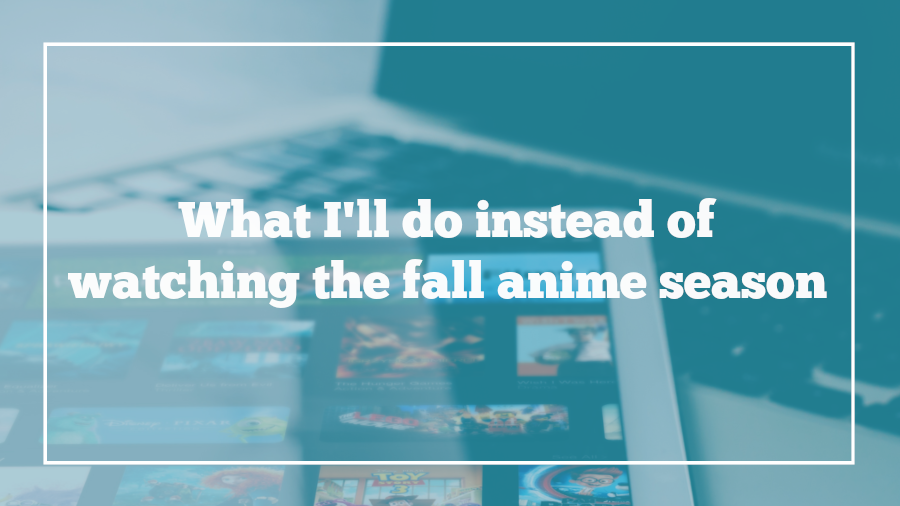 Last week, in a burst of emotion, I wrote my first blog post in a year.

In hindsight, maybe it wasn’t such a good idea to boycott the fall season (or at least the bulk of it, which is on Crunchyroll), at a time when I already feel isolated from the anime community. But consuming anime to talk about it only one of the ways I can reconnect with my fellow fans. I can also write a new blog post and share my thoughts in something longer than a tweet.

Previously, I thought my fall would be totally consumed by anime. I joked about not even having time to sleep because I’d be watching so many shows. Now that I’ll only be watching a handful, here’s what I’ll be doing—essentially what I’ve been doing—since last updating this blog.

Curating the Anime News Network newsletter is my only remaining fandom gig and I take it very seriously. I have held this role for 74 weeks straight. I did not take a week off when I was in labor with my son—I was honestly afraid that  if I did, they’d find a replacement curator that they liked better! So I wrote ANNouncements #54 while timing my contractions, and then John drove me to the hospital. If you received that newsletter, you’ll see that it was written by “Lauren and Bryan,” though I have to say that he wasn’t very much help.

Wait, I have two of them now? And they’re both named after Gundam characters? I guess it’s true what they say: everything happens so much. I spend 90% of my waking hours taking care of them, and that’s a low estimate. With a 3-year-old and a 5-month-old, I’d say it’s a mix of janitorial work and answering philosophical questions. As the archives show, I didn’t plan to be a stay-at-home mom but then quarantine happened, I lost a bunch of gigs and didn’t get new ones, plus childcare is super expensive in my area, so here I am.

I was one of those high schoolers with a sizeable lineup of webcomics on my RSS reader. I read everything from Wendy to Penny Arcade. Now I’ve lived long enough to see both of those creators get cancelled, and I’ve also moved on to reading better comics, just in another format. I was an early webtoon adopter because I started writing about them for Forbes in 2018. Now I look forward to 9 PM every night, when the new episodes come out. Right now I’m enjoying Unordinary, Everything is Fine, Not Even Bones, and Hand Jumper, to name a few.

Ever since I had my daughter, Eva, I have been reading a LOT more. Like webtoons, ebooks are something that I can do one-handed on my phone, while rocking or nursing a baby. For the previous decade or so I had not been reading very much, maybe ten books a year, and now it’s more like 40. When you start reading again after not reading for a long time, at first it’s hard to find new stuff to read. But now I’m in a cycle where I keep preordering or reserving interesting new books (like Nona the Ninth and The Sunbearer Trials) and being perpetually behind.

As it turns out, there is a lot of anime out there that isn’t on Crunchyroll and isn’t part of this stacked fall season. So it’s time to catch up with that. I’m hearing good things about Studio Trigger’s Cyberpunk: Edgerunners. I still haven’t watched Mobile Suit Gundam: Hathaway’s Flash and I make a point of watching every Gundam show/movie, so it’s overdue. I’ve got a bunch of anime shows and movies on my Plex server that are due for a rewatch, too. For example, October is the perfect time to see if the spooky/sentimental Mushi-shi still slaps.

Since I started writing this post, I learned that a few of fall’s buzziest shows will actually be on services other than Crunchyroll. The Urusei Yatsura reboot will be on HiDive. Mob Psycho 100 season 3 will be on Hulu. I’m REALLY hoping Mobile Suit Gundam: The Witch From Mercury will air on the Gundam official YouTube channel. So it’s not going to be a total fall season blackout for me.

I still think that deleting my Crunchyroll account was the right thing to do, but it’s hard to go without. Re-reading this blog post reminds me that I’ll be able to stay strong. I have zero expectations that my little boycott will sway the Crunchyroll C-suite or anything, but at least I’ll be able to sleep at night knowing that at least I’m not supporting their anti-union practices.