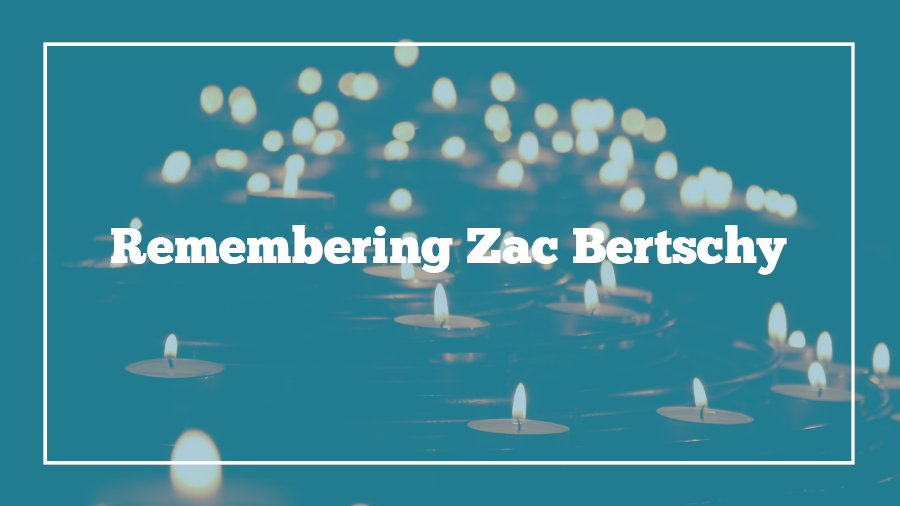 By now you have seen the news that Zac Bertschy has passed away. To me, Zac will always be the human embodiment of Anime News Network: the guiding voice of the publication. His work as managing editor on the predominant English language anime news site has been one of my biggest influences here on Otaku Journalist—and on my career at large.

I’ve been working for Zac as a reviewer and occasional features writer for six years, but I actually started writing to him looking for work as early as 2012. I was one of hundreds of young fans vying for a position writing about anime, so he could afford to have very high standards for the caliber of people he hired. He finally agreed to hire me on a trial basis as a reviewer in 2014, according to my email correspondence with him.

The tenuous nature of my trial status, paired with Zac’s legendary bluntness, made me particularly nervous around him at first. Zac wasn’t afraid to tell me if I wasn’t up to par. As I wrote in this blog post about my first season reviewing anime for ANN, “Did you know I had to rewrite my initial Free! Eternal Summer review THREE TIMES before it was ready to be published? Nobody likes a writer with an ego, so instead of balking I listened carefully to Zac and Jake’s suggestions and I haven’t made the same mistake twice.” As I improved, Zac would give me the occasional compliment which I would carry around with me like a gem. “Did you know Zac said I had a ‘talent for brevity?’” I told John at least three times.

I’m not sure when our relationship shifted to that of equals, but when you email somebody multiple times a week for six years, you eventually get closer. Zac invited me on ANNCast twice, first to talk about sexism in anime, and later to talk about Gundam Wing, a show we disagreed about a lot! I always looked forward to spending time with him at cons. I remember chatting with him at Otabrew (an Otakon party purportedly about sampling new beers, where noted teetotaler Zac had water and Diet Coke instead) about becoming one of the old fans, while Zac, who is around five years older than me, told me about back when he was the youngest in his fandom set. It was incredible to imagine this man, who has entertained, inspired, and hired so many younger anime fans, as the brazen new otaku among the graybeards.

I once asked Zac what advice he had for Otaku Journalist’s audience of aspiring anime career entrants and he said, “You need to be easy to work with.” Zac fit this to a T. He maintained a rarely-updated blog about his struggles with self-loathing. I’m sure he was dealing with a lot behind the scenes but he was always professional to his colleagues. Once when I was having difficulty keeping up with my review schedule, he and Jake set up a plan to let me scale back my output for a while because, he said to my shock, they’d rather have me on staff and working less than quit the site. His kindness extended beyond work, too. I’ll never forget how, when a close friend died unexpectedly in 2017, Zac sent me a condolence card in the mail. I was so touched that he’d take the time.

During a time when writing for ANN was one of my wildest dreams, Zac gave me a chance. Zac, I wish I could go back in time and tell you again how thankful I am for the opportunity to write for the site you’ve shaped so thoughtfully. Rest easy, you’ve built an incredible legacy here.