The Ethical Weaboo: How I justify being a Japanophile in a culturally appropriative world 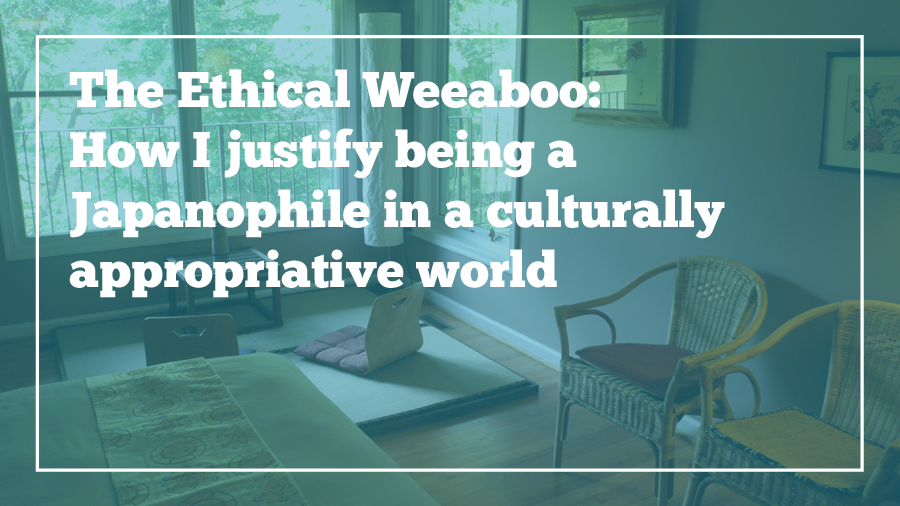 The other week I went on vacation to a Japanese ryokan in Virginia. With onsen baths and miso soup for breakfast, it had all the things I remembered from my visit to a ryokan in Japan last year. When I talked to the owners, a couple who met in Tokyo, they said the main audience for their establishment was “people who want a japanese experience without going to Japan.”

Aside from John and I, there were five other couples staying that weekend—none of whom were Japanese. Most of the other guests I talked to had recently been to Japan and missed it. One of the owners also recounted a recent visit from a newlywed couple in their early 20s who said an interest in anime inspired their visit—and they came all the way from Colorado to stay there.

John and I wore yukata, ate miso-eggplant, and lounged in our room’s tatami area. Outside, we heard the eastern bluebird in the morning and the whippoorwill at night. Never before had we experienced such a total immersion in another culture so close to home.

It wasn’t until I shared some photos online that I realized how bad this looks to other people. Western people in Japanese clothing, using Japanese culture pretty much as a vacation.

Ever since I was seven, I’ve been fascinated with Japan. Years before I saw my first anime, I loved their sushi, folktales, and garden design. It’s hard to pinpoint exactly why, especially since, as a first generation American, I have a big family in Italy with its own culture and customs that I could have latched onto. It’s not that I idealize Japanese culture on a pedestal above my own—in fact, I often find to be xenophobic and close-minded. I’m not sure why I love it, and this is a conundrum that puzzles Japanese people most of all.

Anyway, I’ve always suspected that my interest in Japan is something to feel guilty about, though it wasn’t until the Internet gave me the terms to talk about it that I knew why: cultural appropriation, the act of wearing a culture that isn’t yours like a costume. I can wear a yukata on vacation and then go back to full white privilege when I get home.

Mainstream culture has come a long way in identifying and shutting down cultural appropriation. But it’s also had some missteps along the way. For example, a commenter told me I was being offensive when I tweeted that I was cooking Japanese curry in my own kitchen. As an op/ed on Everyday Feminism put it, it’s hard to tell what’s appropriation and what isn’t:

On the one hand, wearing a kimono when you’re not Japanese is wearing clothing that wasn’t made for you to wear—often without the cultural background of such an item. On the other hand, Kimono sellers are literally going out of business because the western customers they once counted on now find it too offensive a practice. The concern is that people who wear kimono are engaging in “identity tourism.” The solution that most of the articles I’ve linked so far suggest is to ask people who belong to these cultures whether they’re offended, but this is also an issue, implying that your token minority friend can speak for her entire culture.

What I think helps is when cultural appropriation becomes cultural transaction.

“The Navajo Nation is proud of its strong history and welcomes working in collaboration with [Urban Outfitters] and other retailers to highlight our unique culture,” Navajo President Russell Begaye said about the settlement. In other words, the Navajo Nation was eager to share its culture with whomever is interested—provided they receive due credit and compensation.

I think getting paid is a huge part of solving the problem. Appropriation can be defined as “taking something for one’s own use, typically without the owner’s permission,” or basically theft. Theft doesn’t just rob somebody of their valuables, but the authority to decide how those valuables are used. So for me, ethically indulging in my Japanophile tendencies looks a lot like Japanese people and companies getting paid. It’s the least I can do to repay them for hooking me so powerfully on their culture. I donate to the Japan-America Society of Washington DC. I take Japanese lessons from native speakers. I go to pay-at-the-door Japanese Embassy events to learn about sake, rakugo, and traditional lacquer work, so I’m learning the culture’s context at the same time that I’m compensating its artisans.

This isn’t a total solution. I can’t throw money at a problem and consider it solved. As long as I’m a guest in Japanese culture, I need to listen to Japanese people who tell me when I’m being offensive and quit it. I want to contribute to cultural appreciation, not take away from it.

Perhaps this is why this Virginia ryokan was such a complete escape. It wasn’t about me interloping on somebody else’s culture, but coming in the door of a place created for and by American Japanophiles who welcome people who appreciate the culture as much as they do. I was more than happy to part with my cash for an experience like that.

Photo of Pembroke Springs by me. See more of my vacation photos here.

“Is meditating cultural appropriation?” I’ve been practicing zazen myself for something like a dozen years now, and I think a lot of whether this is or isn’t such a thing comes down to motive. If you’re doing it because you want to do it, because you think the thing is in itself worth doing, that’s one thing. If it’s because you want to score cultural points with other people, or impress them, that’s another. To me, that’s the more general rule about a given thing: Why are you doing this?

Like a lot of things regarding cultures outside your own, I think there’s good meaning behind people’s complaints, but at the same time they’re taking it way too far sometimes. That Virginian ryokan, for example, was built & operated with the expressed purpose of giving a Japanese-style experience without having to go to Japan, so are the operators of that ryokan as much at fault as you are for deciding to take part in it? Really, at least to me, this whole “cultural appropriation” backlash seems to be focused around maintaining cultural separation, which is odd because at the same time there are plenty of people who are against things like cultural isolation. Really, while I understand & can even agree with some of the complaints about appropriation, like your example with the Navajos (why even have a line like that if the actual Navajos aren’t involved, if only for accuracy?), some of it is really taking it too far, like your example with the kimono sellers (again, it’s their choice to market & aim towards westerners, so why demonize & punish them?).

Also, on a side note, doesn’t it go the other way, too? Haven’t other countries been appropriating western culture in various ways for decades already? Why isn’t that a problem? I honestly hate talking politics, but I just don’t think someone like Lauren has to “justify” doing something relatively innocent & harmless (and, again, aimed explicitly at westerners in the first place) for her & her husband’s own enjoyment. Hell, I’d gladly see more people go & appropriate some Hungarian culture over here, but I guess it’s not well known enough to complaint about.

My take is that you hit the territory of inappropriate cultural appropriation when you take from a people/culture/religion that has been oppressed and/or denigrated. So I see the Navajo example as being inappropriate cultural appropriation. You also get into that territory of you use a part of another culture in a way that is basically insulting the actual cultural item in a way that is way outside how it actually is. For instance, I forget the pop artists, but she wore an exceedingly short kimono and was wearing geisha makeup, while acting in ways that no geisha would ever act. That was wrong. Period.

I think people who approach Japanese culture based only on what they see in anime is wrong. Don’t talk about loving Japan and such (let alone stating you are or are meant to be Japanese) but not knowing, from study, about actual Japanese culture and history.

I was fascinated with Japanese culture and history from a young age. As I hit my teens of course our society got into a panic over Japan and their buying US companies and real estate, and their goods flooding markets here, or so they feared. Japanese goods sold well then because the products were made well or were innovative. I’ve had an awesome pair of Sony headphones for… Well, let’s just say over two decades. I’m actually listening to music playing on my computer with them.

When I was a teen there were instances when Japanese business or, then thought, heavy influence in future America. Look at LA in Blade Runner. Read any cyperpunk from that time, a movie like Die Hard took place during a holiday party thrown by a Japanese company.

I think the best course I took in college was a 400 level class on Japanese culture, history, and religion. The professor was this awesome woman who, at the time, was 82. She’s lived in Japan for years at time on and off again over decades. The readings assigned were fascinating, her knowledge and stories were incredible. I am so grateful I was able to take that course. She retired at the end of that spring semester (I took the course during the fall semester) What did she do then? Headed for Japan.

My earliest exposures to anime were in bastard edits of “Star Blazers” and “G-Force.”

At 18 I went with a friend and her boyfriend to a general science fiction con in Manhattan. That was my next exposure to anime. I found a corner where a club was watching pirated episodes of Project Ako on VHS.

Then it was… I guess I was 30-32 when I was unemployed, depressed, and needed to escape. A cable channel had Princess Mononoke playing again and again for a month. I think I saw most all airings of it. I was hooked. They also started having some series and other movies.

Also, Japan is pretty famous for appropriation themselves. They decided to base their navy on the British one. That’s why their schools have the uniforms they have. It’s how curry came to Japan as it was eaten by sailors and they found out about via India. The Japanese post WWII, of course, took parts of American culture due to being occupied by the US. Hamburger steak comes to mind. They based their re-industrialization on how the US economy ran, and baseball became huge there as we all know.

Sorry for the long post. Guess I had more to say than I had though when I first started typing.

[…] The Ethical Weaboo: How I justify being a Japanophile in a culturally appropriative world (Otaku Journalist) […]

I think the most important thing is going in with an attitude of respect, open-ness, true appreciation and an outlook toward continual, life-long learning. It’s the difference between the media-driven narrative of ‘cool/weird Japan’ and a genuine, researched and appreciative desire to learn more and embrace other cultures in an increasingly globalised world.

[…] Orsini, the always-interesting Otaku Journalist, recently raised the issue of cultural appropriation, and pointed to an article by Jarune Uwujaren […]

I started a response for here, but when it hit 1000 words decided to post it on my blog instead. TL,DR: within a country CA is as Uwujaren says, because of an imbalance of power. I don’t think it applies the same way between countries, because there’s not a dominant/subordinate relationship (colonial issues excepted). Here’s the full essay: https://foundonweb.wordpress.com/2017/06/29/cultural-appropriation/