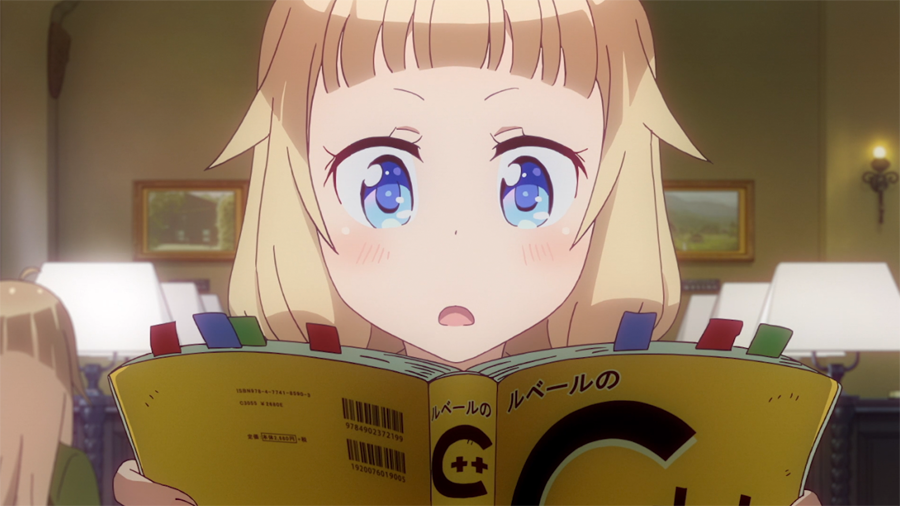 New Game! is my favorite accidentally feminist anime—in an effort to populate the series with only cute girls and have them explore yuri relationships, it’s a show that features an all-female video game company that makes games for exclusively female gamers.

My favorite character is Nene, who has undergone some impressive character development this season. After leaving her Eagle Jump temp gig as a debugger, Nene goes back to college and decides to build her own game from scratch in C++ without using a game engine.

With the help of some dog-eared library books, she builds “Nene Quest” from the ground up, not only programming all of the code, but drawing her own graphics, too. As she continues, she seeks feedback (well, mostly praise) from classmates, friends, and her former temp boss, Eagle Jump’s lead programmer Umiko. For Nene, the best-case result of a finished program is hopelessly intertwined with validation from other people.

I’m not a C++ programmer, but I, too, am self-taught and I definitely saw ties between Nene’s work and mine as a web developer. I know the pain of having one errant curly brace crash your project. I especially found Nene’s approval-seeking very close to home.

Earlier this week I had an especially bad work day in which I had to deal simultaneously with a WordPress issue and with another WordPress developer talking down to me. It’s not so much that I resented him for doing so; it’s that I don’t have enough confidence in my own abilities to say I didn’t deserve to be treated like that. I didn’t get a Computer Science degree. I lack the intellectual and theoretical aspects of a degree, and my skills are narrowly focused on the tasks I’ve had to implement in the real world. I have weird gaps in my knowledge, like sometimes I don’t recognize the correct term for a type of function, even if it’s one I regularly write.

Nene’s skills aren’t where Umiko would like them to be, but Eagle Jump still hires her on a trial basis. Unfortunately, the approval she craves is short-lived. Her new colleague, Naru, has been studying programming since middle school and is mildly incensed that Nene started learning “on a whim” and accuses her of getting hired only because Umiko knows her. It hurts to see Naru drill into Nene like this, but Naru is right. Nene’s skills are impressive for just four months of practice, but she needs to put twice as much effort in to keep up with everyone else.

One of the best podcast interviews I’ve ever done was for Code Newbie, where I talked about being an amateur programmer. Two years later, I wrote about the imposter syndrome I’m still struggling with. Like Nene, I’m able to do my job, well even if I put my mind to it. But I’m not that talented. I Google solutions daily and sometimes seek help from other developers. I can’t do it alone, so I have a hard time allowing myself to feel like I deserve any praise.

I was wondering how Nene’s concerns about her comparatively low skills would manifest at an all-woman company. In our world, women are few and far between in tech jobs, which adds another layer of anxiety for me—I sometimes feel like I’m constantly serving as a representative for all women. Since New Game takes place in a world without men, Nene doesn’t deal with the anxiety of being a minority. Instead, her female coworkers are the instigator she needs to excel, even if it doesn’t always feel that way to her. 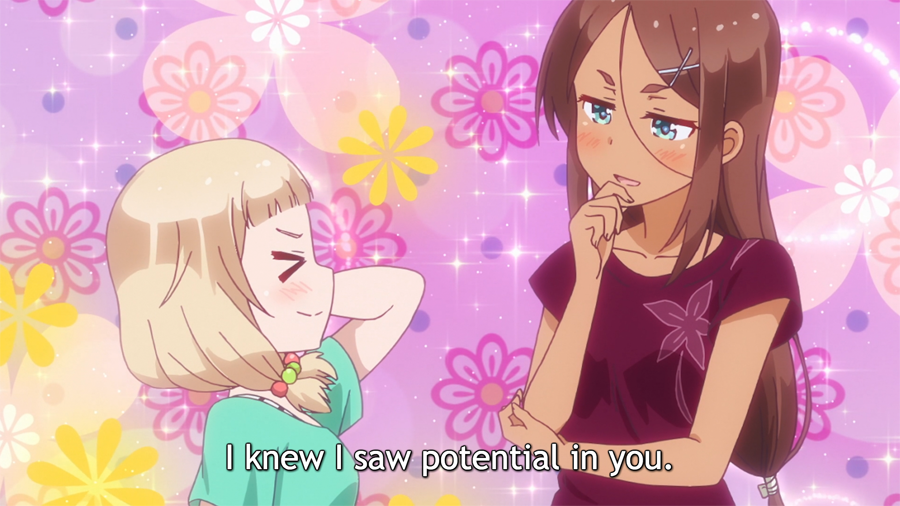 Naru’s prodding and Umiko’s guidance (and potential praise) help Nene push her impulsive, fun-loving tendencies aside to put her all into her work. I feel the same way: working with other people keeps me from getting too down on myself or too stagnant in my work. For a self-taught developer, a support system is a great way to determine whether your skill level is too low or outdated. And for a developer who might not be able to find validation internally, Nene can earn it through showing her hard work off to her mentor.

The second season isn’t over yet, but I’m thrilled to see how far Nene has come. I especially love that she’s not a genius and she’s not always as focused as she should be—but she’s always respondent to feedback, even if it isn’t positive. Nene’s story shows me that maybe it’s not such a bad thing to rely on friends and mentors a little. Whether you’re self-taught or educated, none of us really does it alone. Listening for not only praise, but tough-love critique, can help us get better, no matter what skill level we’re at.

New Game! is streaming on Crunchyroll.

New Game is now an open tab in my browser.

I think you are being way to tough on yourself.

I’d put a *lot* of the weight towards that guy talking down to you was for no other reason than you are a woman. I recall from when you wrote for ReadWrite, and seen it pretty much anytime I read a woman’s tech article, you caught crap in the comments section for no other reason that you were a woman who “dared” to write on tech.

And let’s hear it on self taught! I’m the same. My degree is in Anthropology.

Most coders I know hit google and other sites often. Including ones with comp sci degrees. Also that most will hit up or bounce things off other developers.

And, yes, women are not common in the field sadly, and plenty leave it (or a comp sci program) due to how their male counterparts act towards them. And yes, I’m certain that any woman programmer feels the weight of having herself judged as representative of all women in the field. Ugh.

Thanks so much for chiming in. This counts as me receiving validation from you, and I appreciate it! I didn’t realize you were a self-taught programmer! Honestly, I never would have known.