An entire year of One Piece 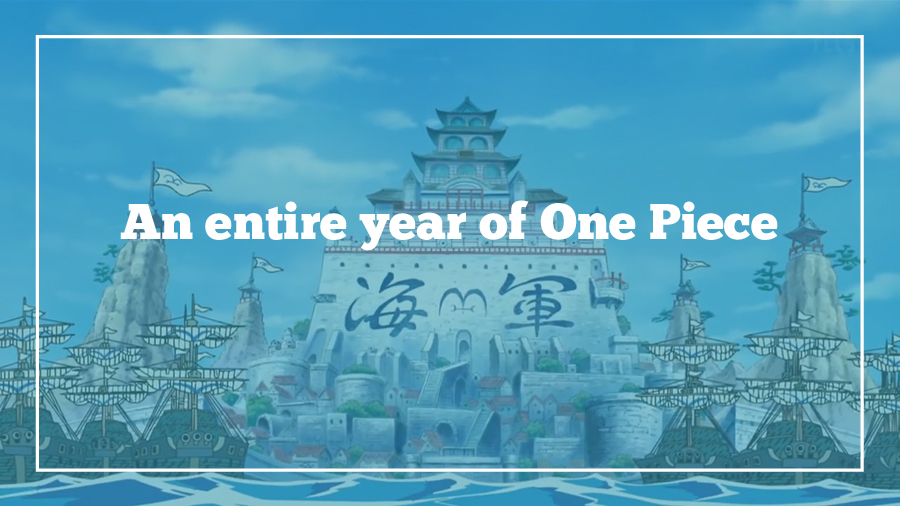 I didn’t set out to make “finish One Piece” a New Year’s goal and it’d be a terrible one anyway—the show has 800+ episodes and counting and nobody needs to watch that much TV in one year! But I had a lot of days this year where I was feeling down and nothing except Luffy’s relentlessly positive attitude could help.

This was my first experience with One Piece ever since I read some scans back in middle school up to Usopp’s introduction, and I have never seen anything like it. Few anime are this enduring and even if they are, they’re not always worth the time.

I didn’t watch One Piece every day, and I didn’t watch every episode (I skipped a bunch that friends told me were non-manga filler). But it’s definitely the longest I’ve ever spent time with a single piece of media so I wanted to share some of my thoughts.

A story that lasts

Before I began watching, the main thing I knew about One Piece was that it is impossibly long. As of this writing, there are over 800 episodes!

Published in Shonen Jump since 1997, the One Piece manga turned 20 last year. Eiichiro Oda was an early bloomer, launching his career at age 17 when he won several awards for his very first manga, Wanted! He worked as a manga assistant until age 22 when he first published One Piece, a hit from the very beginning.

Initially, Oda had the entire story planned out for a five-year run. But because it got so popular, it took on a life of its own. Today One Piece is the best-selling manga in history and among the top 10 best-selling anime in Japan. All this, and it’s only slightly more than halfway complete.

With that forecasted ending in mind, it’s impressive to see how thoughtfully the plot moves. I’m at the Summit War arc that has been signposted for ages, ever since Ace gave Luffy a mysterious blank piece of paper. It’s a climax that formed organically from an initial quest to visit Fishman Island, and I’m still surprised at how much that got out of hand. It’s a long story, but every twist deepens the plot and strengthens the reality of the One Piece world.

A story that inspires

Perhaps it’s because Oda already knows how it’s going to end, but I never feel like One Piece is taking me for a ride that isn’t going to pay off, even when circumstances take the characters further from their goal than ever. Oda is a master of this “darkest before the dawn” storytelling style: just when a terrible outcome for Luffy seems inevitable, he manages to turn it around.

It’s interesting to watch One Piece as a model for suspenseful fiction. What keeps so many viewers so engaged for so long? Many other stories have a motley cast of unique heroes and villains, emotional arcs of friendship and redemption, and an uncommonly positive message. There are also things One Piece does badly, like its insensitivity toward LGBT people and Sanji’s attitude toward women. What makes it irresistible in spite of its many flaws?

If I were to put my finger on what One Piece has and so many other shows do not is a world that is markedly different from our own but nonetheless too real-feeling to question. A spirit of exploration only works in a world where viewers truly believe that tuning in means making rewarding discoveries they have never seen before and won’t find anywhere else. I’m not saying that One Piece makes viewers lose their grips on reality; I’m saying that its characters, settings, and storylines make sense in a logic that fits this story alone, so clearly that readers and viewers don’t question it.

A lot of stories are entertaining; few make their viewers believe in them so deeply.

You can still start now

I thought that my One Piece window had closed forever. It’s already long and it’s still going! It’s impossible to catch up. So when I started watching, I decided I wouldn’t catch up.

Trying to get current on One Piece sounds like a job I don’t want, so when I clicked play on episode one last January, I told myself I’d only watch it when I felt like it. I stuck to that but I didn’t expect just how much I’d feel like it. I admit I didn’t read as many books as usual in 2017 because instead of reading a chapter before bed, I’d watch an episode or two of One Piece.

Right now I’ve gotten back to reading more books, plus it’s the start of a new season and I’m watching a lot of first episodes. I haven’t watched any One Piece so far in January, but I’m not concerned about it. When I’m ready to watch more, it’ll still be there—and a lot of it!

In other words, don’t let the show’s intimidating length stop you. You can still enjoy it in 2018. You can watch a little and pause whenever. You can even call it quits. But if you manage to do that, I’m guessing you have a lot more willpower than me.

did this a couple years ago. i gave up right where you are now actually. i didn’t really care about anything that was going on.

1) good world building and the story builds on itself nicely. Its not Naruto, but things keep getting bigger and the big bads are forshadowed early on.

3) the story takes, chances, more so than dbz. what i mean is not every arc is just building up to luffy fighting the big bad there is different kinds of stories

1) long recap and opening, i know this what everyone says but yeah you got work that remote or mouse when you watch it.

2) the fights themselves have too much space in between. like everyone of them. when goku is fighting freeza i am ok with taking some time between punches to look at the exploding planet or something like that. But like every fight in one piece they fight, they argue whaterver, they do a move then they explain why it didn’t work or why are hero escaped. some fights they cut to like a crowd cheering then cut back to the fight. i don’t mind them stretching out a few important fights, but every fight feels stretched.

3) it has the rogue one problem where every member of the crew and there gets to be like 8+ members of the crew have to do something special for them to win. so this takes a while. in the arc me and lauren are on they fix this, but this is very taxing, in many arcs.

would i recomend it?

no, not really, watch naruto if you haven’t

One Piece is a series that I do enjoy, & I certainly acknowledge its place in anime/manga history, but I haven’t experienced all too much of it, at least relative to how huge it is. I started off with fansubs way back in the day, and when FUNimation finally started releasing the show on DVD I decided to buy at least the “First Season” (i.e. the East Blue stuff)… But then I kept finding good deals for the “Second Season” sets (i.e. the Baroque Works stuff), so I wound up with ~150 episodes or so on DVD. I’ve already sworn to never buy any more sets, and so far I’ve managed to keep that promise, though I do have a couple of the movies, as well. Who knows, though… One day I’ll probably find great deals on the other sets, so maybe one day I’ll wind up with even more of the anime on DVD, and it’s not like I’d regret it, because One Piece is just that good.
I also used to experience the series through my friends, who generally kept up with both the anime & manga, so I was mostly familiar with what happened in the story up through about the stuff with Don Quixote Doflamingo, which is when they both started slowing down on watching the anime, so anything afterwards I only know very basic ideas about. Super long-running shows are definitely an investment, but at least they’re ones that you can do at whatever pace you want. So many people get too focused on “getting caught up”, and I think that’s where the hesitation comes in.

While the anime is nice, I’ve pretty much stuck to reading. Not that the anime is bad, but as Joe mentioned, the previous episode recap is just unbearably long. Plus, it doesn’t take that long to read a chapter. When VIZ started releasing the volumes digitally, I read up to current within a few months and would usually knock out a few volumes a day. Now, I can spend 30 minutes a week reading the latest chapter and digging into the previous chapters to check on some references.

Keep on going. I have a feeling you’ll like Carrot who is hanging with the Straw Hats right now.

One Piece is HUGE! I wish honestly it would just end already, but there are so many unanswered questions that are still lying around. I feel the more I watch, the farther away I am to getting answers or to the ending of the anime. I know it has a long way to go but my goodness…..will my grandchildren only get the pleasure of seeing the ending? I feel I will be in Heaven before it ends….ugh.

I forget what episode I stopped at…I tried catching up with reading the manga and that worked….only for a little while. Some chapters are so boring, and they are so WORDY (FULL of dialogue, usually silly ones at that) so I decided to wait for the anime to kind of push forward. I don’t want to read the manga anymore as it’s just not the same as the anime. It looks different and too cartoony compared to the anime (just my opinion).