This is fandom reporting in 2020 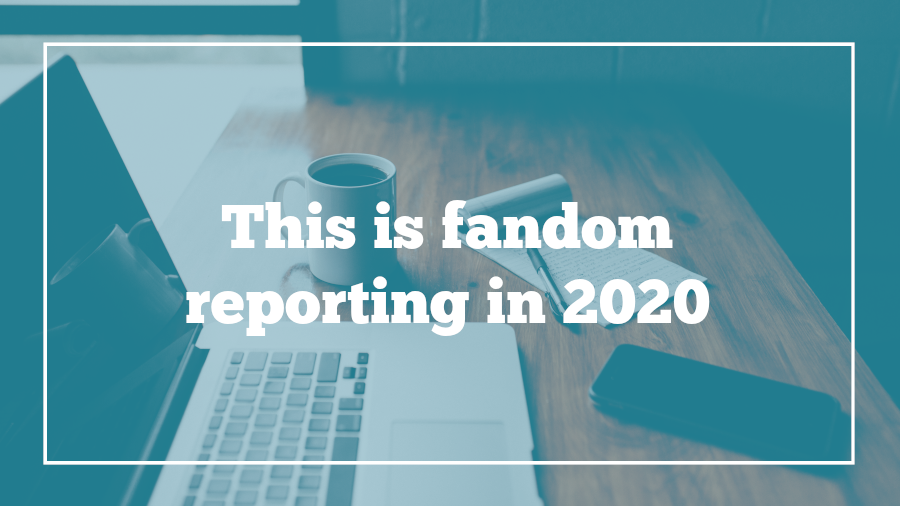 Recently a brand I mentioned in an article praised my coverage and asked if they could send me some of their products as a thank you. I replied by asking if instead, I could have an opportunity to interview the founder, and attached some of my most burning questions about the company. They probably won’t reply, but it felt like progress.

For me, this was one small step toward a bigger goal. Lately, I’ve been itching to sink my teeth into long-form reporting again, to tell a true story about fandom that feels relatable to fans within the community and teaches those without it something new. In short, I’d like to get back to the kind of work I started writing for this blog ten years ago.

I’ve got some leads, but I’m not there yet. My current work/life balance scale is still tipped dramatically onto the mom side of things. But in the meantime, I’ve been making a renewed effort to read the kind of writers whose work I consider to be at the very top of this field.

Long after I carved my niche into “otaku journalism,” the oeuvre of fandom reporting has grown more creative and clever with each passing year. I used to have a list of around ten obscure publications to pitch about fandom topics. Now you can read about even the most obscure internet communities in the New York Times.

To me, good fandom reporting is about empathy. It’s easy to be a goggle-eyed fandom tourist, posting tweets and nasty observations with zero interest in a deeper dive. I particularly like to read about fandom from self-identified fans: they’re better equipped to serve as tour guides into subculture communities that often have their own lexicons.

This is by no means exhaustive, but here are some of the fandom reporters whose work I have read and admired lately.

Lynzee Loveridge. I have previously interviewed Lynzee back when her name was Lynzee Lamb. Since then she has moved up to Managing Editor at Anime News Network and has differentiated herself by not giving a fuck. She covers difficult, messy stories in anime fandom that other people are afraid to touch. Her explosive investigations on Vic Mignogna and Eric Torgersen brought to light abuses of power that had previously lived only in whisper networks. Her nuanced, careful research helps to bring justice to their victims.

EJ Dickson. EJ is not only a fellow Daily Dot alumnus but a fellow mom, so her current prolific coverage for Rolling Stone gives me hope that I, too, can get back in the game. As the recent founder of a podcast about Cats, a movie I’ve heard is endearingly awful, she knows what it’s like to be way too into a niche interest. She brings this empathy to her fandom reporting, particularly this kind, tolerant treatise on furries that I genuinely wish I had written.

Gita Jackson. Gita recently left Kotaku, the site where I did my first internship, to move to Motherboard, where I am sure she will continue producing the searing hot video game takes she is known for. Her story about abuse claims at EA could be a tutorial on investigative reporting. Meanwhile, her recent personal essay reviewing Fire Emblem: Three Houses through the lens of abuse feels especially vulnerable and brave.

Aja Romano. Like many Extremely Online people, Aja has gotten mixed up in their share of chaos, and I’ve always applauded the grace with which they acknowledge and grow from their past mistakes. Currently, they’re at Vox providing some of the most informative news you can use on fandom controversies, like the recent Romance Writers of America implosion that I’m not ashamed to admit, I couldn’t begin to understand before Aja’s explanation.

Elizabeth Minkel. It’s so hard to write well about fanfiction, a secretive, Othered space that’s always evolving and evading a mainstream definition, but I’d consider Elizabeth an expert. Her coverage last summer of San Diego Comic-Con gave voice to the creeping commercialization of what it means to be a fan. I’m also a huge fan of Elizabeth’s Fansplaining podcast, co-hosted with Flourish Klink, and weekly newsletter The Rec Center, co-written with Gav.

This is a really short list, and I’m sure I’m forgetting some very deserving writers who should be on it, probably including writers I know personally (sorry in advance). Please tell me about YOUR favorite subculture reporters in the comments so I can read their work, too.